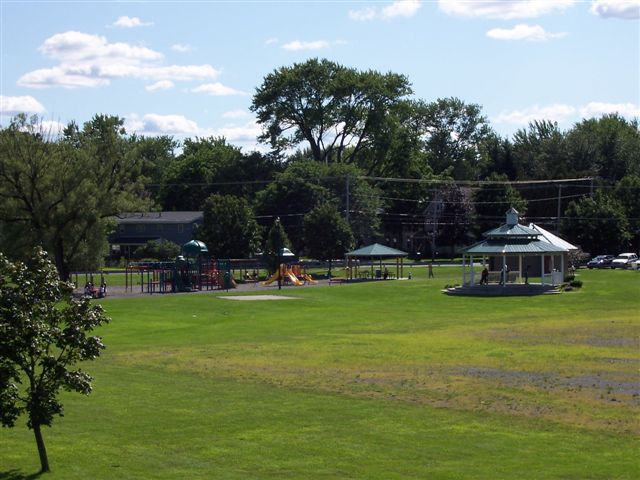 Mr. Jabez Lewis moved from the Mohawk Valley to Manlius center, where he ran a store. He married Mary Reals, who was from a prominent family in the Manlius Center area. In 1845 Jabez was elected supervisor for the Town of Manlius and was again elected to the same office in 1854-1855. He served on the Onondaga County Board of Supervisors, and in 1856 was elected to the New York State Assembly. As an assemblyman he was in charge of Indian Affairs for the State’s Legislative Division. It was said that in the early years, he often traveled to Albany on horseback.

In 1860 he moved to Manlius Station (Minoa) and became the freight agent for the New York Central Railroad. He was responsible for insuring delivery of all goods coming into this large rail complex.

In the early 1860’s a small group of Methodists developed plans to build Minoa’s first Methodist Church. Mr. Lewis, who owned a large tract of land in the area, offered a site at the corner of South Main and Hulbert Streets. Mr. Shoemaker, a State Assemblyman in 1864, offered a site on East Avenue. The East Avenue site was selected. Sarah Helfer Leonard in 1935 wrote, “We can only imagine what a difference in the history and growth of the town if the other selection might have been made.”

On January 13, 1913 Minoa voted to become an incorporated village. In 1963 Sidney Smith, owner of Minoa Coal Company, and his wife Mary Lewis Smith donated the land, now Lewis Park, to the Village of Minoa in the memory of Jabez Lewis (Mary’s great grandfather).

The village was pleased with the Smith’s gift of land, as they needed space for a recreation area. They knew it was a major undertaking, since they would have to fill the swamp on the West Side of the park called Sid Smith Pond. This swamp was Minoa’s old skating rink. According to the women in Minoa’s North Main Street gang this was where all the kids gathered on winter nights. They added that it wasn’t too easy skating among the weeds, and they all took many spills. A small building, owned by Sid Smith, hung over the swamp and was supported by large stilts. Under the building was a large log that served as the changing station for the children. Often, on cold nights, they built a bonfire and stood around it to keep warm, share stories, and enjoy being with their friends.

George and Pearl Rees, who resided in the old Helfer Homestead at 317 East Avenue, loved Minoa and were very influential in encouraging the young people of the village by their contributions of time and money. Rees Field, located on Osborne Street, was originally part of their spacious backyard and was donated to be used as an athletic field for Minoa kids. The Rees’ later installed the lights which enabled Minoa High School to play night football games and made Minoa the envy of other county high schools. Rees Field is still being used regularly by ESM High School and the many sporting activities sponsored by East Syracuse Minoa Youth Sports.